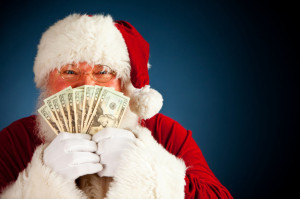 It’s the last month of stock trading for 2014 and everyone should be taking advantage of the Santa Claus rally!  The Santa Claus Rally was fist mentioned in the Stock Traders Almanac in 1972 and is the boom of the market from the end of November to the New Year.  It’s what everyone asked Santa for at the mall!

Some believe that the rally is due to people feeling good about January.  January has traditionally had a lift after investors create stock loss selling in order to offset their gains. This is called the “January Effect” and investors are prone to take advantage of it annually.

Some also believe that the rally is due to money managers pushing up the market in order to make their bonuses for the year.  Bonuses are paid annually and if all of the market makers are working together, they can push the market up and get an extra percent of profit thus delivering them extra bonuses in their stockings.

And others believe that investors are in a good mood around this time of year and people invest more of their hard earned money to take advantage of the rally before the end of the year.  There is less volume during the holiday weeks and the market goes up because there is positive sentiment and lower trade amounts.

What ever the cause is, every investor should take advantage of it.  Talk to your advisor and make sure you are taking advantage of this positive time of year!

If your advisor only leaves you coal in your stocking email me and I’ll find you a better advisor!

David Lester is a best selling author and professional Financial Coach, helping people be better with their money. David has written a personal finance book that breaks with traditional attitudes towards finance and describes his own philosophy to money that he has gained through his personal and professional experiences. His philosophy on money applies to many areas of everyday life, including banking, investing, goal setting, shopping and entertainment.